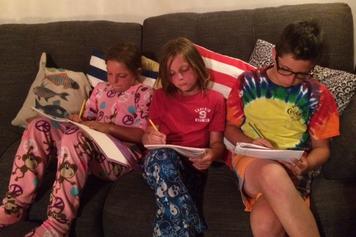 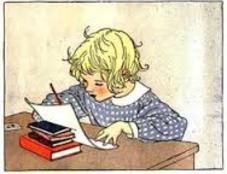 Young Writers - Try some of these

Metaphors
I love the sound of metaphors, don't you?

A metaphor is a comparison of two different things that have something in common.

You must write it without using the words 'like' or 'as.'

My favorite metaphor is from a poem entitled "The Highwayman" by Alfred Noyes.

The moon was a ghostly galleon tossed upon cloudy seas.

Can you spot the comparison? The eerie moon in the night sky seems to glide among the clouds the way an ancient Spanish ship (sometimes called a galleon) tossed upon the restless sea.

Here is a metaphor written by Satch, one of my third grade students. Pretty amazing for third grade, I think!

An echo is a blinking Christmas light.

Have you read a metaphor you like? Try to write one of your own. E-mail it to me and I will try to include it on this page in the future.

Another bright idea: Metaphors are super fun to illustrate. Can you do it?

A diamante is a diamond-shaped poem that tells about opposites.

Let’s write one together!

First, think of a pair of opposites such as light and dark or dog and cat.

Clouds
My region of California sees the first signs of spring during February and March. The golden hills begin to green. Locals travel along The Blossom Trail where trees and vines burst with color. My favorite part is the wondrous cloud formations.

Do you look for pictures in the spring clouds? Do you know that everyone sees something different?  You might see a dog with an alligator on its head. That same cloud looks like a giraffe to me!

It is most fun to draw them. Take your paper and colored pencils outside today and draw what you see in the sky. But, hurry! If you look away for too long, the breezes blow and your alligator-headed dog will turn into a zooming NASCAR.


Bare Trees
What do you see when you look at a bare winter tree?  Is it lonely?
Does it scare you? Perhaps you see beauty.

I see a sturdy skeleton. Resting, waiting to support the leaves and blossoms of the coming spring.

One of my students had a similar idea as he wrote the following Haiku:

See the soldier tree
Guarding and waiting for spring
When blossoms will grow.
© Chris M.

Here is another perspective:

A brown bare flower
Standing in the winter breeze
Trimmed by the cold man.
© Katie R.


Try it! A Haiku is a tiny Japanese poem. It is traditionally written about nature. Follow this pattern:

Soccer
A cinquain has a slightly different pattern.

Did you watch a fireworks show this summer? Many people get to see one on the Fourth of July, or at a baseball game, or amusement park.  I don’t completely understand how they work, but I love them!

My students and I write firecracker poetry together.

First, think about lying on your blanket beneath the summer sky.
What do you hear? What do you feel?
Make a list of firecracker action words. Here are some of ours to get you started:

Do you smell anything? Taste anything?

How would describe what is happening in the night sky?

Can you turn your ideas into a poem? What would you shout out to a firecracker?

Send me your ideas and we will add them to our poem!

We can hardly stand the wait!

Crack a laser lemon lightning bolt
That rumbles the Earth with a jerk and a jolt.